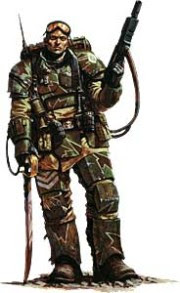 Sorry for the long wait on a post but I was waiting on my friend to come over and play a game of 40k so I can post up a battle report but no luck. So instead I would like to write about the Imperial Guard Stormtroopers. I know that they are an expensive unit but I think they are worth every point if played with the Airborne Doctrine. They can bring alot of fire power on board when they deepstrike in were you want them. Imagine dropping 2 inches away from a monstrous creature/vehicle or a large bothersome squad and hose them down with AP3 hot-shot lasfire, melta, or plasma with either a 5 or 10 man sqd. For me they work best as either a 5 man melta squad or a 10 man plasma squad. You may think that if only they don't scatter somewhere disasterous. To you I say, " that's why airborne allows you to re-roll the scatter dice." If you scatter badly after the re-roll then the dice gods are not with you. Remember that 40k is just a game and taking risks is a big fun factor in it. When the risk pays off your fun just doubled.
Posted by V.Reyes at 10:04 AM 3 comments:

I listen to several Hobbytalk Network podcasts and happy to mention the their warhammer 40,000 campaign, Hyperion 2010: Soul Harvest, is now available online and can be played by anyone. You can find the description of the campaign on the Independent Character website. You can find the link on their site and here fot their campaign. Happy gaming :)
Posted by V.Reyes at 3:54 PM 1 comment:

LOL. Not exactly but I bet his DNA was used for the project. I've been hearing about how effective people are using ogryn squads and being surprisingly successful. The big problem for me in doing this is that I DO NOT want to pay 22 bucks per Ogryn model to field them.
So I was thinking what I can use in-leu. While looking through my old issues of white dwarf (which I purchased when it first published), there is an article in issue 303 that talks about genetically engineered super humans with the drawback of having very bad luck and granting the opposing force preffered enemy against these guardsman but they had the awesome abilities of they old Imperial heroes that they are cloned after.
So I've decided to get a box of scout space marines for the same price as one ogryn model and count my scouts(painted as afriel strained guardsmen) as ogryns(what a mash up).
I think it's a good idea and a great way to make my guard a little unique in a sense. So tell me what you guys think. 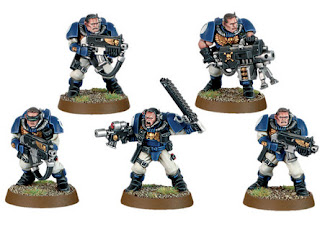