I was listening to a recent episode of The OVERLORDS podcast and heard a good segment about modelling war trophies on figures and reflected on what htey were saying. Having trophies are cool and show what your army has gone up against. This can also display fluff for your army and have something to talk about to your friends. So here is my opinion on what I think about war trophies on models.

The ork hunters unit recently displayed for the Heroes of Armageddon is a good example of having war trophies on your models. Weapons and armor show a certain veteran status that displays that they have gone through hell and back and can prove it. The picture above show some guard veterans that have ran into some orks and re armed themselves to re-engeage more enemy units. 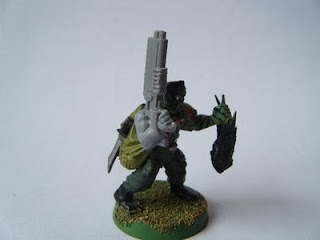 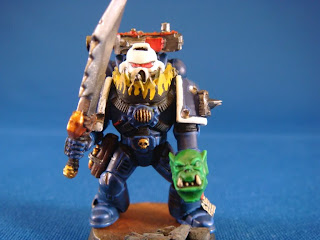 Some times having to much trophies will make your unit look like a clutter ball making the model unrecognizable and somewhat deminishing the appeal of them.

So trophies are cool in my opinion but used wisely. If used wisely they can make the unit look even better if they didn't have them. So what arre your guys opinion on it? am I right or Wrong?
Posted by V.Reyes at 3:59 PM