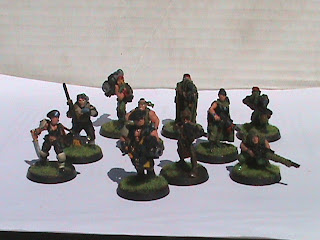 I was finally able to finish Harker and his 1st Griffon Commando Squad. I have Harker represented as a Harakoni Grunt. In his squad are two Harakoni light riflemen, a Medusan female riflemen, and 7 Catachan representing a Missile launcher team and 3 snipers. I used the Rocket Girl from Schaeffers Last Chancers, 2 Catachan Sniper models, MAD Larkin and a female model from Gaunts Ghosts, an escher ganger and the rest were bit bashed from Different ranges of IG sets and Space Marine Scouts. I'm still looking into replacing the 3 snipers I have for 3 grenade launchers most likly to represent Medusan rifleman.
The reason I used Harker as a Harakoni then a Catachan was that Harakoni prefer using Heavy Bolters and Plasma guns and I have ALOT of Catachan in the squad already. I wanted the squad to represent "The Best of the Best" from my regiment in one squad. 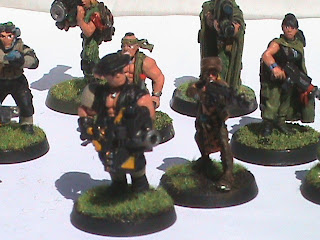 In front I have Harker put together using Catachan bits, the heavy bolter arms from the scout space marine box and green stuff for his boonie cover. Next to him is an escher ganger with a green stuffed patrol cap. 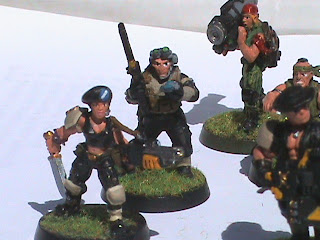 Here I have the old catachan female figure Oop with green stuffed beret and a shoulder pad from the valkyrie gunners and shaved down grenade launcher. Next to her is a guardsmen using a set of Tau fire warrior arms, a bandolier from the scout marine box, guardsmen legs and torso, and a scout space marine head. 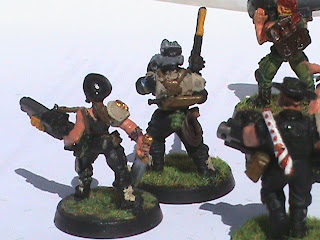 On the back of the rifleman is a boyonet and behind Harker is a Bond staff from the Tau sprue to represent him as a veteran from the Medusa 5 campaign and as a "beat you down" stick :) If you have any questions on the conversions or want more pics let me know and I'll be happy to provide them. 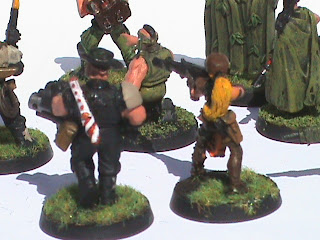 Also These AWESOME weapons came out from Chapter house studioes so check them out when you can
Posted by V.Reyes at 12:24 PM 3 comments: 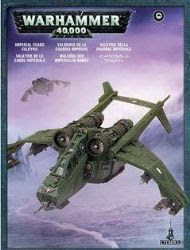 I am building some new models right now. I am working through a Manticore/Deathstrike kit, a valkyrie, 5 stormtroopers and a veteran squad.

The Veteran Squad (Harker unit) I mentioned before are almost finished. All I need to paint up now is Harker himself.

I finished putting together a Valkyrie which will be kitted with rocket pods and be hand painted similar to this P-51 mustang. 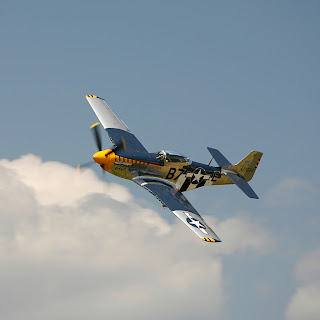 I will be painting 5 more stormtroopers as Harakoni Warhawks whick complete 3 10-man squads. This will allow me to have a complete Stormtrooper Strike Force to play an Apocolypse game(pics of the complete unit later) :). So far so good. The only thing bad to report is that a AgR has shut down recently were I play Apocolypse and wish the old owners best of luck.
Posted by V.Reyes at 9:41 AM 2 comments: