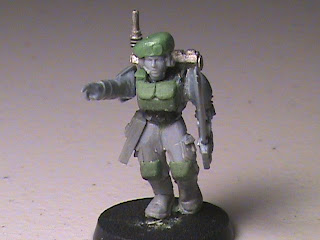 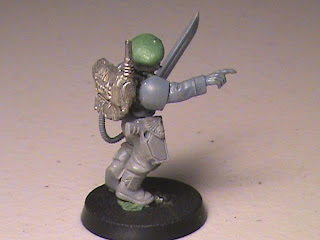 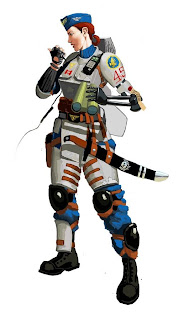 This is not an April Fools. trick. she is real:)I wanted to use an Officer of the Fleet and make the model special from the rest of my models on the board. It would only make sense to have a Harakoni Officer as my Oof to deal with reserves since I start my Harakoni in reserves. While looking up images and icons for the Harakoni I found this pic. What better way to represent someone unique then to have a female Oof. I decided to take the hard task to re-create her in my army and began thinking of ways to convert a female Harakoni officer. I came up with the model above. I used the power sword with robotic arm and the right pointing arm from the I.G. company command sprue, Green stuff, pistol with holster from the space marine captain sprue, a set of Cadian Imperial Guard legs, a Tau fire warrior upper torso, a Kasrkin stormtroopers backpack and a sister of battle head that comes with the vehicle sprue of an Immolator. So far I'm happy with the results. I'll be painting her up soon. Let me know what you guys think. :)
Posted by V.Reyes at 11:15 AM