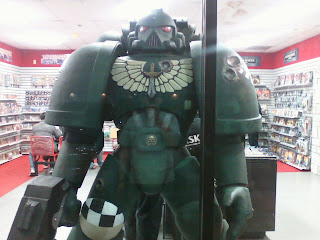 I arrived at the LA BATTLE BUNKER and was properly greeted by a Dark Angel :)

Heres a desription of the game on the GW website held at the LA battle bunker:

January 22nd 11 AM
Warhammer 40,000
Name of Event: The Apocalypse total package event!
Brief Description:
You have never played in an Apocalypse games until you've played in the Apocalypse Total package event! This event is what Apocalypse is all about. Come down to your local battle bunker and join the fun as EVERY battle Bunker tries to set a new Apocalypse World record! So, we encourage all you Warhammer 40,000 fanatics that have a local Battle Bunker to get signed up and take part in something un heard of! How many points you ask? Bah, points are for the weak, bring what you can control!

All I could say is WOW. It was record breaking. I had a good time down at the LA bunker representing Adventurers Guild of Riverside with my Imperial Guard. I had taken Col. Straken with his CCS; a CCS equipped with sniper rifles, a Master of Ordinance; 2x 5 man StormTrooper sqds w/ 2x melta guns, 2x 10 man StormTrooper sqds w/2x plasmaguns, a 10 man StormTrooper sqdsw/g.launcher and flamer; a 4 sqd. Infantry Platoon with 6x mortar, 2x missile launcher,& a Hvy Bolter; 4 vet. sqds a with demolitions: one with 2x flamers and a hvy flamer, one with 3x g.launchers, one with 3x meltaguns and one with 2xg.launchers and a flamer; 3x Scout sentinels; 2x Vendettas; 2 regular Leman Russ tanks with no sponsons and a Leman Russ Punisher w/Pask and hvy bolter sponsons: adding up to 200 models at 4,000 points.
I never thought I had so much. I ended up playing at table 20 versus an Eldar player and a chaos player with alot of Traitor Guard tank support which was staring down at my foot infantry. The eldar player mainly focused on an IG player with his Eldar that was in front of him the whole 4 turns while another AGR player and I swept from his right against his armor. All in all we barely won on our table by 2 points at the end of the night. Overall the Imperium won 183-122 at the bunker.

So here is a battle report of what I did at the game on table 20:

Their was ALOT of eye candy at the shop that I wasn't able to take all pictures of and my camera to do justice to their paint scheme. It's was announced that its' going to be an annual event. 40K RADIO was also present and live streaming the event on u-stream. More pics can be found at apocalypse40k blospot 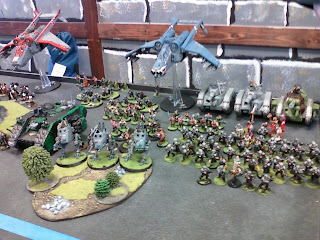 A pic of my 171st Cadian Imperial Guard Regiment (not including my stormtroopers). 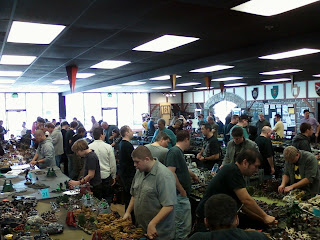 The players and the battleground. 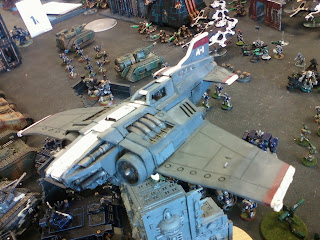 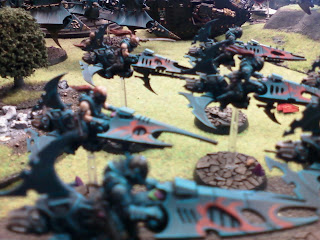 Some nice Dark Eldar Reavers spotted on an adjacent table.
Posted by V.Reyes at 8:18 PM