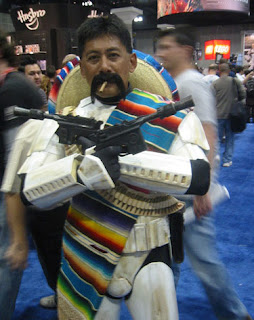 Been quite busy lately with the holidays; prepped for a tournament in november but now cancelling due to family events, term papers and final exams.

I listened to a couple of podcasts out there and heared a lot about the meta-game the community is playing. Right now infantry armies are the hot thing since it seems that everyone is taking Aegis Defense Lines to go toe-to-toe with flyers and vehicles. What I predict is that people will eventually go back to what they have been playing before because it sounds like a cycle. I foresee the 40k community begin playing infantry based armies to fight vehicles and flyers (which is beginning), then they will move to the anti-infantry armies with vehicle and flyers to beat out the infantry units. Then they will go back to their old army play style or realize they spent a lot of money on their army and think about playing 40k Apocalypse LOL.

Anyways, I've been reading up on 6th edition and spotted the gunslinger rule and see how it can apply to my Imperial Guard. I see that it only applies to special characters (i.e. veteran sgt.'s) and then it clicked. I've talked about Stormtroopers before. The Storm Trooper Sergeant can not only duel wield pistols but Plasma Pistols as well. So not only can one have 2 but 4 plasma weapons in a 5-man deep striking unit. HE HE HE :) Also a good guardsman exploits what only he has available to his army. An army overlooked by the community is the only ally they can have and that's Sisters of Battle. Ready the new FAQ the Sisters of Battle Canonness with the Acts of Fate CAN give a 40-man blob squad +1 initiative and preferred enemy on the first charge. Imagine that with Colonel Straken within 12'.  Not only that, let's up it a step and place that Cannonness in a full squad of Ogryn. WOW I like to see that on the tabletop but who knows since the assault phase seem to scare  people.

So to add I've been working on a conversion with a dual plasma pistol wielding storm trooper sergeant because I have have three squads of storm troopers already. I also removed some dust and began painting a 10 Battle Sister Squad I had shelved since 3rd edition. More to come later when things calm a bit
- vmreyes1 out.
Posted by V.Reyes at 2:15 PM