Before I begin my report I want to share my update on the hobby. On my workbench is painting/ converting my valkyrie into a vendetta with a snake theme nose art I spotted on-line of an A-10, Tyranids from the "Battle for Macragge" set to change things up, some Sisters of Battle heavy weapons models and other conversions. 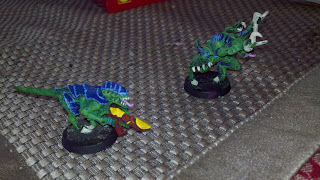 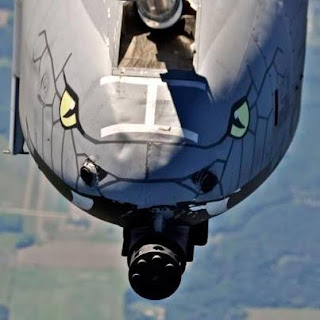 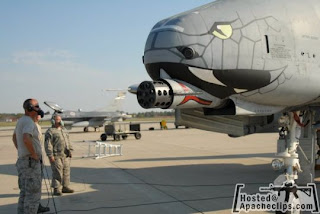 The A-10 Thunderbolt "Warthog" 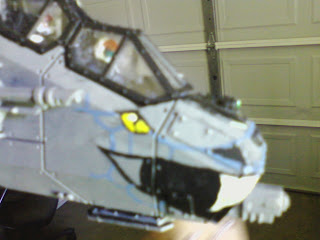 The Vendetta at this time partly painted and without conversion

I was Roaming sites a while back and discovered the Medusa V Campaign Site. On the the site I spotted a Solo Mission battle plan the worked out interesting. It's hard for me to play with others and family members that have armies on hand. So I set everything up using a 1500pt IG army list I had laying around. My 5 yr. old son was available for the project to roll dice and make some decisions for Warp possessed guard. A battle narrative/ battle report can be found below. My boy had a blast calling his controlled Storm Trooper Squad "Juggernauts" LOL. 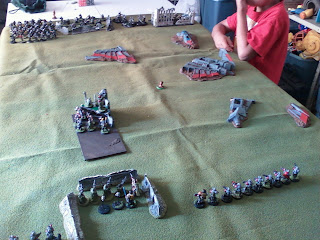 The battle field using buildings/ ruins from the 3rd ed. starter box. Pre-painted Barracades from that era also. The down aquila from the 4th ed. "Battle for Macragge" box. (Son in background who set the board up). 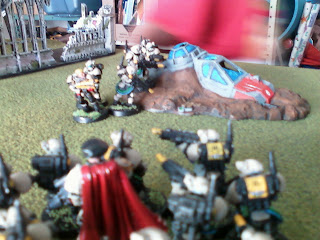 My sons "Juggernauts" sited by my Storm Troopers after deep-striking in. 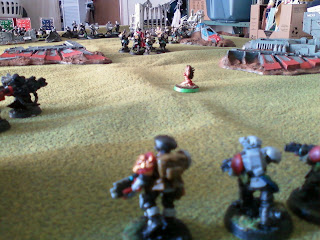 The objective interestingly in site by my vets running towards the sound of  las-fire.

Orders were sent by Regimental Headquarters of a down hijacked aquila transporting the daughter of a nearby governor. Pirates had taken over the aquila in the same orbit while the regiment was refueling. The nearby adeptus arbites had lost communication going after the ship. Echo Company was chosen in to retrieve any survivors.

The Lord Commissar decided to leave back the Major and his vets and taken a supported infantry company and a storm trooper company with him to help recon the area. A day passed and no communication from the commissar was made due to interference.  The major took action and gathered three of his best veteran squads with a storm trooper squad on stand by.

As soon as the Major made planet fall, the sky turn black and a great purple cloud risen far from the landing site. The Major dispatched his scout squad to the coordinates given to him by headquarters.

In the first hour the Majors scout squad reported the findings of the down aquila and the possibility of an opposing force heading to the site. The Major quickly reacted and ordered his men to double itme towards the crash site.

The second hour quickly came and the scouts reported that the opposing force resembled that of the commissar and his platoon but reported that the opposing force look terribly distorted and recieved mortar fire seriously injuring one. The scouts begin firing upon an enemy squad taking out two and causing them to run back. The major continued his effort to get to the site and having a squad to reach the scouts.

During the third hour the scouts reported more mortar fire and a flanking force to the east. The scouts again recieved more mortar fire hurting two more. The storm troopers finally recieved proper coordinates and deep striked on the battlefield landing in front of a group of "juggernaut" troops. They quickly fired upon the enemy taking out some of them with ease.

The fourth hour came with bad news. The Juggernauts fired and assaulted the stormtroopers sweeping in a horrific manner viewed only in recordings sent back to ship through their helmet cams. The veterans arrived on the heels of the assault and rescued a lone suvivor of the aquila. A visual identification with pix from the governor of his daughter were made and positively IDed the lone survivor as her.

The Major and his troops quickly moved away from the large distorted force heading their way. The Major Quickly boarded the retrieving Vendettas/ Valkyries and headed back with an accomplished task at a large price paid.
Posted by V.Reyes at 3:18 PM