Defender of the Imperium 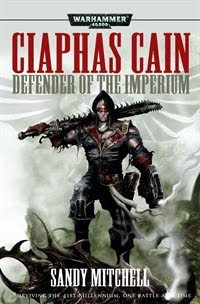 Synopsis: The legendary Commissar Ciaphas Cain, lauded as one of the great heroes of the Imperium, finds himself thrust onto the battlefield again. Cain wants nothing more than to keep out of trouble and get to the other side of his commission in one piece, but the war-torn 41st millennium has other ideas. Confronted with the powers of Chaos and hordes of alien foes, our intrepid Commissar seeks to sidestep danger and talk his way out of trouble. Yet each time he survives his legend only grows, and his life is in ever-greater jeopardy… Defender of the Imperium contains the novels Death or Glory, Duty Calls and Cain’s Last Stand, plus the short story Traitor’s Gambit and a new introduction from author Sandy Mitchell.

Content: It starts with a short story called Sector Thirteen. The story takes place while he was attached to a Valhallan Field Artillery. Great short story that starts the pace of the next story which is Death or Glory. Death or Glory is the story of when our hero crash lands on the planet of Perlia. He fights a lot of orks while trying to meet up with local Planetary Defense Forces. During his trip to safety he meets up with a lot of stragglers while in ork territory. They unknowingly turn the tide of this long fought war while trying to survive from the orks in ork territory. Duty Call was the second book that involved him and the Inquisition and his main squeeze Ordo Xenos Inquisitor Amberly Vail. Another short story was included called Traitor's Gambit which was pretty good. The Third of book included is called Cain's Last Stand. Cain finds himself on Perlia again this time during the 13th black crusade and awaiting the attack from Abaddon's forces.

Review: I rate the book a 4 out 5. Overall a great book and recommended read for those who play guard and who like to read books about heroes.

(Spoiler ALERT): I loved the short stories and the fist novel Death or Glory especially how Cain gets into the fight with the Ork Warboss. A lot of side content was included that makes you think of your armies more; such as the two different ways Sisters of Battle are portrayed in Duty Calls and Last Stand. Traditions through out different Regiments were talked about such as a blue feather worn by Drop Regiments such as the Harakoni Warhawks to signify a Drop Veteran. Another cool fight was when Ciaphas fought a rogue psyker by using his thinking skills other then his tactical fighting skills that always gets him out of trouble. I also liked how his partner Jurgen was more of a partner then a lackey follower and was expressed by Cain himself. The pair reminded me of Don Quixote and Sancho Panza. The great thing of the compendium is that all the stories intertwined one way or the another which gave the stories depth.
The things I hate was the time it took to reach to the plot. A large part of the story dragged on with nonsense writing (I like short to the point). Also the repetitive description of how his friend Jurgen obnoxiously smells is annoying because its expressed almost every paragraph in the book. Other the a few other things Ciaphus Cain and Jurgen are BAMF. :)
Posted by V.Reyes at 1:20 PM